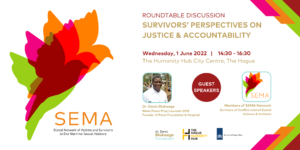 Marking its 5th anniversary, members of the Global Network of Victims and Survivors to End Wartime Sexual Violence (SEMA) speak out at the World Justice Forum 2022 in The Hague. Together with Dr Denis Mukwege – the Nobel Peace Prize Co-Laureate 2018 – survivors of conflict-related sexual violence (CRSV) highlight their pursuits of justice, the lack of effective mechanisms thereof, as well as ways to ramp up preventive actions. Facilitated by the Dr Denis Mukwege Foundation, survivors in more than twenty countries are connected to advocate and demand accountability for the atrocities committed against them. The discussion held at The Humanity Hub was also attended by Pascalle Grotenhuis, the Dutch Ambassador for Women’s Rights and Gender Equality.

“States have a legal and moral responsibility to protect their citizens and ensure perpetrators are held to account. Sexual violence as a weapon of war is considered a war crime, a crime against humanity, and can amount to genocide. In international law, and in the national laws in many countries, there is legislation recognising crimes of sexual violence in conflict, yet perpetrators of these crimes largely go unpunished, and judicial processes do not meet survivors’ needs,” said Dr. Denis Mukwege whose works at the Panzi Hospital and Foundation in the Democratic Republic of the Congo has established a golden standard of holistic care for victims and survivors of CRSV.

Sexual and gender-based violence has been identified as one of the cheapest yet most effective weapons of war. In multiple countries affected by conflict, sexual violence inflicts lasting consequences within the communities, further disintegrating the society, and harming peacebuilding efforts. Risks of HIV/AIDS transmission, children born of rape, social exclusion, and financial discrimination are just some of the challenges these survivors have to brace for as they are trying to rebuild their lives. Through the SEMA Network, survivors find peer support and organise themselves to demand accountability from individuals, institutions, or states who have the responsibility to protect their rights as civilians and ensure perpetrators are hold to account. Furthermore, they collaborate to create collective memories – in songs, films, poems – so that their stories will not be forgotten. Within its five years of activism, SEMA members have spoken to the leaders/ representatives of the United Nations, Human Rights Council, NATO, and the wider diplomatic community. Members of the network have also contributed to the drafting of the Murad Code and other advocacy documents that help guard law-making and peacebuilding processes. However, access to redress, compensation, guarantees of non-repetition (of violence), and other forms of reparations scarcely materialise.

The journey to obtain justice is still far from the finish line. Sometimes it can feel slow in achieving progress. Therefore members of the SEMA Network gather in the Netherlands to further discuss their outreach strategies. Jacky, a member of SEMA Network from Kenya stated that, “Sexual violence left you with invisible scars. This crime needs to be punished and the survivors should be treated with similar attention as those who have lost properties. Justice means different things for survivors. Some needs acknowledgement for closure. For others, they need reparations. For survivors with children born of rape, they need recognition and acceptance. Without it, there is a risk of passing on intergenerational traumas and it is never good for any country. We need to heal and healing begins with acknowledgement.”

Angela, a victim from Colombia, reminds us that justice must be victim-centered. Victims blame themselves after suffering violence, for three things: that they have been victims; that they have given birth to a child from the violence they experienced; and the guilt and the weight of silence.

“In Colombia, victims are still very stigmatized. Whether you speak or not, you are still stigmatized and stigmatization is one more form of victimization. What then is the benefit of speaking out for victims if nothing changes? We need guarantees of non-repetition so that these atrocities do not happen again to other women,”  said Angela who has been campaigning within her capacity as a SEMA Member, Board Member of the Global Survivors Fund and National Coordinator of the Network of Women Victims and Professionals in Colombia.

ABOUT THE MUKWEGE FOUNDATION

The Dr Denis Mukwege Foundation is an organisation that supports survivors’ demands for a world where sexual violence as a weapon of war is no longer tolerated and bears consequences for individual perpetrators and states. We work for a future where survivors receive the holistic care and compensation they need to rebuild their lives. We create opportunities for survivors to speak out and be heard, and where they can organise to create change, influence policies, and demand justice and accountability. Accordingly, in 2017, the Mukwege Foundation initiated SEMA – the Global Network for Victims and Survivors to End Wartime Sexual Violence –to mobilise survivors to participate in matters that concern them. The Foundation helps organise the retreat and 5th anniversary of the SEMA Network with the support of the Dutch Postcode Lottery, the Dutch Ministry of Foreign Affairs, the Hague municipality, the Humanity Hub, and other partners.

ABOUT THE SEMA NETWORK

SEMA currently represents victims and survivors of conflict-related sexual violence (CRSV) from over 20 countries across Africa, Asia, South America, Middle East, and Europe. Working together, these survivors draw global attention to the continued use of sexual violence as a weapon of war and call for the changes needed to end the violence and achieve justice. SEMA members influence policies and programmes by advocating for changes in how we address sexual violence in conflict. The SEMA network enables its members to share experiences and to learn directly from one another. Members support each other and strengthened so that they are better able to reach out to those still suffering in isolation. To learn more about achievements of SEMA members, visit this article.

Follow us on social media for more updates about the survivors’ movement.

For press inquiries, please contact Shintya Kurniawan at shintya@mukwegefoundation.org or +31622604039