SEMA is the Global Network of Victims and Survivors to End Wartime Sexual Violence. Coordinated by the Mukwege Foundation, SEMA gathers survivors from 21 different countries, and works with frontline organisations supporting them in their healing and advocacy journeys. They act in solidarity and mobilise collectively to speak out about the reality of sexual violence in conflict and create change through innovative awareness-raising and advocacy activities. Find out more about SEMA’s achievements here.

Despite extraordinary barriers related to the stigma associated with wartime rape, the survivors have already created incredible momentum for change. Thanks to the support of the Mukwege Foundation, in November 2018 and March 2019, 33 and 52 (respectively) members of SEMA met to further strengthen their solidarity, strategise on the network and participate in public events to gain greater awareness for the issue of conflict-related sexual violence. What reverberated from these gatherings was the enormous untapped power of these women, and the clarity of their call, “Nothing about us, without us”.

“Being with all the other survivors made me feel respected, loved and free, this is what I am striving for. With them, I realised that I am not alone, that survivors are strong, and that together we can bring positive change.”

A survivor from DRC, November 2018

At its second global retreat in November 2018 in The Hague, the group decided on the name SEMA for their network. ‘Sema’ means ‘Speak out’ in Swahili, the mother tongue of Dr. Denis Mukwege, who is an inspiration for all survivors and NGO representatives working to abolish the use of rape as a weapon of war.

During the November retreat, SEMA members also established four working groups within the network, focusing on reparations, collective memory, charter/structure and communications. These groups are survivor-led, allowing them to make decisions and control the development of the network.

Participants from the retreat also received a training from Ida Sawyer of Human Rights Watch in order to strengthen their skills for carrying out advocacy activities. Furthermore, in a dynamic roundtable, countries presented their work and successful projects, both to provide inspiration and indicate where their strengths are for other countries who may want to learn more on a given topic. This knowledge-sharing notion is a primary component of the global network, proving to be a successful means particularly for countries in transition to learn from those post-conflict.

In March, the third annual retreat took place in Luxembourg, a few days before the Stand, Speak, Rise Up international conference. The retreat was characterised by regional discussions, strengthening of the working groups and exchange of experiences. With 17 countries represented, survivors felt support in learning about other countries and showing their solidarity to those who faced and are facing similar struggles.

These two global retreats helped SEMA develop four main goals in order to reach its vision of ending rape in conflict. These include: (1) Maintain a safe international platform for survivors to come together and strengthen one another, (2) Raise awareness about the reality, causes and consequences of wartime rape worldwide, (3) Recreate a narrative on wartime rape through memorialisation tools and (4) Advocate for the abolition of the use of sexual violence as a weapon of war.

Putting survivors’ voices are the core of international events

Besides each global retreat, SEMA members attended and participated in high-level events, therefore bringing their voice in the international discussion on wartime rape, peace and security, women’s rights and dignity.

In November 2018, they were invited by the Mukwege Foundation to share their expertise and experience during its international conference ‘From words to action: repairing the wounds of wartime rape’, together with high-level speakers such as Dr. Denis Mukwege, the United Nations Special Representative on Sexual Violence in Conflict Parmila Patten, and several ambassadors. 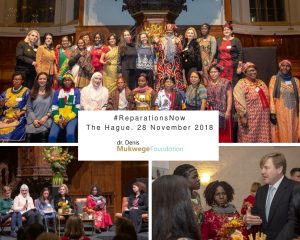 In March 2019, SEMA members were the special guests of the international Forum Stand Speak Rise Up, hosted by Her Royal Highness the Grand Duchess of Luxembourg, in partnership with the Mukwege Foundation and We Are Not Weapons of War. Twenty members of SEMA spoke in different panels as experts during the event about holistic care, reparations, survivors’ movements, children born of rape, the use of technology, justice — all issues where the survivors’ perspective is needed for relevant action to be taken. Without these voices, it is difficult to fully understand the situation and needs of survivors, and get concrete ideas for change, as the survivors are the ones having the best vision for the most needed concrete actions. 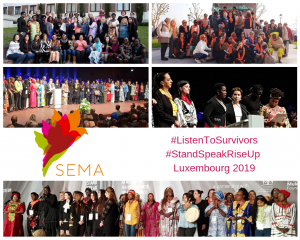 In parallel to this incredible international work, survivors are organising at national level. Thanks to the Dutch Postcode Lottery, the Mukwege Foundation is able to support the development and actions of survivors’ networks in five countries (DRC, CAR, Nigeria, Ukraine, and Syrian survivors in Lebanon).

Follow SEMA on Facebook  and support survivors by sharing their voices, breaking the silence, or making a donation.