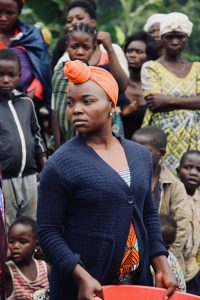 On this occasion, the Mukwege Foundation presented a one-week VIP screening of SEMA (which means speak out in Swahili). This film exemplifies our initiatives to amplify survivor’s voices, fight stigma and put survivors at the centre of what we do. SEMA follows the lives of two women from different backgrounds whose lives are changed forever by rape, and who must find the strength to survive and make a difference for themselves and their children.

The film was collectively written by the Movement of Survivors in DRC with support from the Mukwege Foundation and Panzi Foundation. It was directed by Congolese director Macherie Ekwa, written by more than 60 female survivors and 90% played by survivors of sexual violence in the DRC who bravely reenacted their own traumas.

The Movement of Survivors in DRC officially released SEMA for free and publicly online on June 19. Please enjoy the film and stand with survivors.