On the occasion of June 19, the International Day for the Elimination of Sexual Violence in Conflict, the Movement of Survivors in DRC premiered a special debate surrounding the themes addressed in the film SEMA including stigma, seeking justice, children born of rape and reparations. 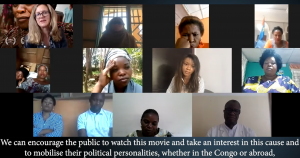 “Many victims say that they prefer to remain silent and to suffer in their flesh instead of going to court. It is critical that we – the community – can encourage them and show them that it is not their fault. I think that if women feel supported this way, they will have much more courage to go to court. It is not only a way to put perpetrators in prison, but to also dissuade society from these practices. The bodies of women belong to women, not to the community.” Dr. Denis Mukwege