Who is Dr
Denis Mukwege?

Dr Denis Mukwege is a world-renowned gynaecologist, human rights activist and Nobel Peace laureate from east Congo. He has become the world’s leading specialist in the treatment of wartime sexual violence and a global campaigner against the use of rape as a weapon of war.

As a child Denis Mukwege accompanied his father, a pastor, to visit the sick in Bukavu, a city in the eastern part of the Democratic Republic of the Congo (DRC) on the shore of Lake Kivu. One day, they went to see a terminally-ill boy. They prayed for him but were unable to do more.

Mukwege was eight years old at that time and decided after this experience that he would become a doctor. He told his father: “You can pray, but I will give medicines.”

Today Denis Mukwege is a world-renowned gynaecologist. Due to the high level of sexual violence in the region and a war that has been shaking east Congo for more than two decades, he specialised in the treatment of women raped during the conflict. 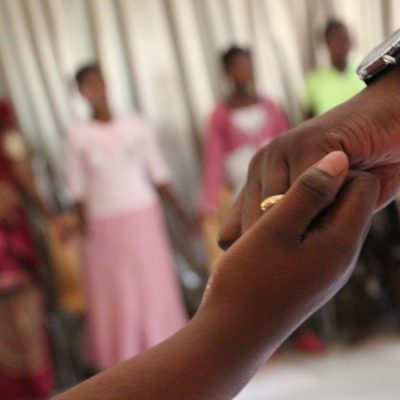 On an empty plot of land in Panzi, a hilly, impoverished neighbourhood on the outskirts of Bukavu, Denis Mukwege founded Panzi Hospital in 1999 as a clinic for gynaecological and obstetric care. However, when war broke out shortly after, more and more patients arrived with gruesome injuries. Girls whose organs were destroyed by gang rapes. Women whose vaginas were torn apart by the insertion of weapons.

At that time, Dr Mukwege was the only obstetrician-gynaecologist in the region. As Panzi Hospital became a refuge for thousands of victims, the team developed a specific expertise in the treatment of wartime rape.

Panzi developed a model that integrates psychological support, legal assistance and socio-economic support in the existing medical facility. “We can’t just treat the finger or the ear,” Mukwege explains. “We have to see the person as an entire whole.”

Over the years, Dr Mukwege has become a world-leading expert on how to treat the wounds of sexual violence.

What really gives us hope is, above all, the capacity of the women we treat to recover.
Dr Denis Mukwege
Photo: UNHCR/Jean-Marc Ferré

Global advocate against rape as a weapon of war

Dr Denis Mukwege campaigns globally to bring the use of rape as a weapon of war to an end. He was awarded the 2018 Nobel Peace Prize for his activism and received numerous other awards for his outstanding services to survivors of rape.

As the number of rape victims arriving at the gate of Panzi Hospital increased, Denis Mukwege realised that medical services alone will not solve the problem. “You can’t operate against violence,” he says. “You can only abolish it.” Together with the Yazidi activist Nadia Murad, Dr Mukwege received the 2018 Nobel Peace Prize for his “efforts to end the use of sexual violence as a weapon of war and armed conflict.”

In his efforts to bring the topic to the attention of the UN and other international organisations, to increase protection for women and to advocate that those responsible for sexual violence be brought to justice, he has become a leading activist for human rights and gender equality.

Dr Mukwege received numerous awards for his work, including the UN Human Rights Prize (2008), the Right Livelihood Award (2013) and the Sakharov Prize of the European Parliament (2014). TIME magazine listed him among the world’s 100 most influential persons and the Carter Foundation named him a ‘citizen of the world.’

In October 2012, a few weeks after he had given a speech at the United Nations in which he denounced the decade-long conflict in Congo, five armed men invaded the compound of his house in Bukavu. They held his family at gunpoint and killed his friend and security guard, Joseph Bizimana. Denis Mukwege survived the assassination attempt but fled with his family to Belgium for a short period of time.

In east Congo, women started to save money which they brought to the hospital, willing to pay for his return ticket. Dr Mukwege decided to respond to their calls. Despite continuous threats against him, he returned to Bukavu in January 2013 and resumed his work at the hospital.

Sexual violence is a global problem that affects all humanity, not just women.
Dr Denis Mukwege
Our partners