Joint Statement by Dr. Denis Mukwege and Nadia Murad on the War in Ukraine 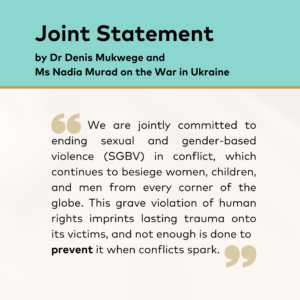 We are jointly committed to ending sexual and gender-based violence (SGBV) in conflict, which continues to besiege women, children, and men from every corner of the globe. This grave violation of human rights imprints lasting trauma onto its victims, and not enough is done to prevent it when conflicts spark.

Together we share the common objectives of prioritising the prevention of SGBV in conflict, providing access to adequate health and counseling services for survivors, and ensuring that States enact judicial frameworks that protect and assist victims of this crime.

Our respective activism to protect women and girls from gender-based violence brought us together, leading to our Nobel Peace prize award. However, it was our common goals and shared mindset towards the protection of survivors of conflict-related sexual violence that led to us founding the Global Survivors Fund. Today, we continue to strive for the recognition of the right of survivors of conflict-related sexual violence to reparations and other forms of redress.

We remain deeply concerned about the war in Ukraine. Although we are heartened by the proactive humanitarian response to assist civilians fleeing the conflict, today more than 10 million people – particularly women and girls – have been forced to flee their homes and become refugees or displaced persons. However, countless civilians still remain trapped amidst the ongoing violence and conflict, unable to seek refuge and fearful for their lives. Both of us know far too well the consequences of such chaos, destruction, and desperation.

Although we both come from different countries and cultural backgrounds, the armed conflicts we have respectively witnessed and endured – as well as what was relayed to us by the thousands of fellow survivors we have encountered– imply one major commonality: whenever an armed conflict erupts anywhere in the world, official reports on instances of SGBV in conflict are soon to follow. Further to this, history has shown us time and time again that rape and brutality against women only increase during times of war and humanitarian disaster. The war that began in 2014 in Ukraine with its hundreds of victims of conflict-related sexual violence, should serve as an early warning sign. Today, we already hear extremely worrying reports of alleged cases of rape and other forms of sexual abuse and this must stop.

It is for this very reason that we hereby call on States and humanitarian actors to ramp up sexual-violence prevention efforts on the ground, and make known our commitment and full support towards advocating for any such measures, that serve to protect the most vulnerable during conflict situations, in Ukraine and elsewhere around the world. We remain convinced that if all actors work together millions of people can be protected from shouldering further sorrow. There is still time to work on prevention, if we act now – rather than waiting for the official reports of rape or other forms of sexual violence in order to enact countermeasures.

A survivor-centric approach has always been at the core of our work. Hence, we also beseech State actors, international organisations and other stakeholders working tirelessly to aid the growing numbers of refugees, to endorse a trauma-informed approach in their responses. The primary needs of civilians fleeing conflict – shelter, food, clothing, and basic services – must be covered, but all too often we have seen that other equally essential services are lacking: trauma counseling and dedicated reproductive health services.

Through our work at GSF, we have documented that victims of SGBV in conflict do not always immediately speak of the atrocities they have endured, due to fear and stigma. Access to trauma counseling provides survivors with a safe space in which to make sense of what they have experienced. And access to timely reproductive health services, whether or not they have been subject to SGBV, can save lives.

We further urge both sides to abide by the Geneva Conventions, to which both Russia and Ukraine are parties: ceasefires must be upheld, and humanitarian corridors that allow for the safe passage of medical supplies to assist victims of conflict must be respected. There are far too many innocent lives at stake and civilian deaths are on the rise.

More broadly, we communicate our intent to continue working in close collaboration with all stakeholders involved in the humanitarian response, to provide proactive solutions that prevent and counteract sexual violence in conflict. The impulse and generosity shown in Ukraine and its neighboring countries serve as a reminder of what could be a benchmark for all actors, elsewhere in the world. This work has already started for us many years back, by virtue of our advocacy and the founding of GSF. We will continue to take it forward – in Ukraine and wherever in the world conflict may arise in the future.