Using the mantra of “Together We Can”, members of the Global Survivor Network engaged hundreds of fundraisers at the annual conference of the Resource Alliance. The reaction of the audience after the speeches was overwhelming.

The International Fundraising Congress (IFC) is an annual event organised by the Resource Alliance, which brings together over 1,000 fundraisers and change-makers from more than 65 countries to share new ideas and perspectives. This year, the event was held on the 16th to 19th of October.

During the closing session, Esther Dingemans, the Director of the Mukwege Foundation, and two members of the Global Survivor Network, Dalal Ali Kheiro and Sylvia Acan, shared their stories and vision to end the use of rape as a weapon of war. Using the mantra of “Together We Can”, the survivors showed how collective power is essential to reach this aim.

Presentation of the International Reparations Initiative at fundraisers conference

After the survivors’ speeches, Esther Dingemans introduced the International Reparations Initiative. This initiative is an innovative mechanism that not only responds to the needs of survivors but also lays the foundation for a renewed commitment of the international community to take action on the use of sexual violence in conflict. The project seeks to make reparative justice a reality and change the lives of individuals, families, and communities worldwide. Esther Dingemans emphasised that we can make an even greater impact by joining hands and working together.

“Bringing everyone together means we are going to join hands, work together, to make sure that in all the different countries, rape is not acceptable,” said Sylvia Acan from Uganda.

The reaction of the audience after the speeches was overwhelming. Both Dalal and Sylvia received standing ovations and many participants came over to them to show their support.

A few days after the event, Sylvia was still deeply moved by the speeches and the audience’s reaction. She said that the reaction of the audience “means that we are uniting to end rape and sexual violence in all the countries around us”.

Survivors like Sylvia and Dalal are breaking the silence by telling their stories and calling for change. But to actually make a difference, we not only need to support survivors when they break the silence, but we also need communities around the world to provide resources in the fight against sexual violence. 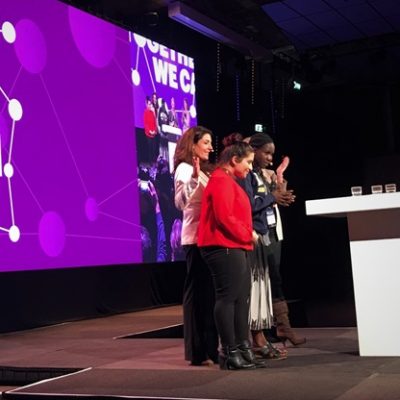 Watch the video from the conference: