“Women belong in all places where decisions are being made.”

This famous quote from Ruth Bader Ginsburg rings true for survivors of wartime sexual violence, including for members of the national survivors’ network in the Central African Republic. On 21 January 2022, le Mouvement des Survivantes de Violences Sexuelles en Centrafrique (MOSUCA) was invited by President Faustin-Archange Touadéra to participate in the launch of a national committee dedicated to the fight against sexual and gender-based violence (SGBV). Together with the in-country team of the Mukwege Foundation and other partners, they discussed the importance of recognition and reparations for survivors of sexual violence in conflict. MOSUCA’s testimonies were recognised and their struggles were acknowledged by other committee members. 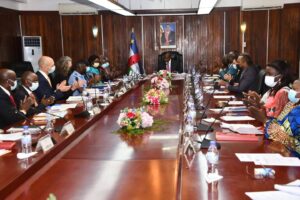 Moving forward, MOSUCA’s role in the strategic committee will focus on campaigning about the rights of the survivors as well as raising awareness about the harmful consequences of SGBV. They aim to raise awareness nationwide so that survivors of sexual violence in conflict will no longer be stigmatised and will have the chance to reintegrate into society and receive support.

The presidential invitation is a welcome and well-deserved milestone for MOSUCA, which has tirelessly advocated for justice for survivors. Since it was founded in 2018, MOSUCA has grown from 25 members, based in the capital city Bangui, to more than 300 members across the country. They have organised and participated in several large-scale advocacy events, including at the International Covenant on Civil and Political Rights (ICCPR) in Geneva in March 2019. With the support of Human Rights Watch, MOSUCA submitted recommendations – urging the national authorities and the United Nations to ensure justice for survivors of sexual violence in conflict and to provide medical and psycho-social support.