A team from the Mukwege Foundation and the Global Survivors Fund has visited Ukraine on a joint mission to assess priorities, needs and strategies to support survivors of wartime sexual violence. 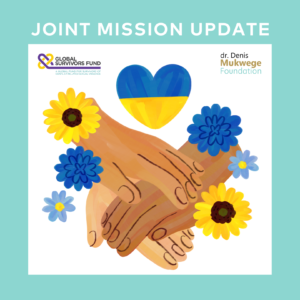 Following shocking reports of widespread sexual violence committed by Russian troops after the full-scale invasion of Ukraine, the Dr. Denis Mukwege Foundation (“Mukwege Foundation”) and the Global Survivors Fund for Survivors of Conflict-Related Sexual Violence (“GSF”) travelled to Ukraine last week at the invitation of the Ukrainian Government Commissioner for Gender Equality Policy Kateryna Levchenko under the leadership of the Deputy Prime Minister for European and Euro-Atlantic integration of Ukraine Olha Stefanishyna. The purpose of the trip was to assess how the two organisations could support Ukraine in ensuring access to holistic care and reparations for victims of conflict-related sexual violence.

Executive Directors Katrien Coppens of the Mukwege Foundation and Esther Dingemans of GSF met with representatives from national, regional and city authorities and national and international organisations, including representatives of the Ministries of Justice, Defense, Internal Affairs, Health and Social Services. The organisations also met with professionals from the health, social-services and justice sectors, and members of the Ukraine branch of the Global Network of Victims and Survivors to End Wartime Sexual Violence, together with long-standing partner: EUCCI: the Eastern Ukrainian Centre for Civic Initiatives. During their week-long visit they also visited shelters and medical facilities in Lviv and Kyiv, including the Institute of Paediatrics, Obstetrics and Gynaecology of the National Academy of Medical Science.

Sexual violence is being perpetrated by Russian troops on a large scale. Over 400 reports of sexual violence from 1st – 14th April have already been received by the Ukrainian Parliament Commissioner for Human Rights and an increasing number of reports of sexual violence are beginning to emerge from de-occupied territories. Based on what we know from other conflicts, this is likely the tip of the iceberg as many civilians are still living in occupied territories, unable to report violence or seek care. Fear of reprisals and continued threats of aggression and occupation further contribute to underreporting of sexual violence. We heard from survivors that Russian forces threatened survivors that they would return if the survivors came forward and reported violence.  Given the current situation and the volatility of the ongoing war, there are no guarantees that the threat of sexual violence is over. 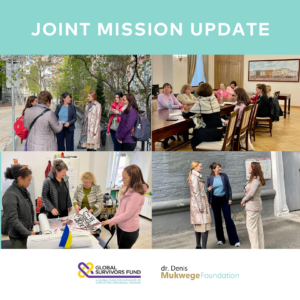 There are multiple indications that sexual violence is being used as a strategy by Russian troops in this conflict.  Tactics, including humiliation, forced nudity, rape in front of family members, the rape of children and of the elderly, and other heinous and dehumanising acts in violation of the laws of war were reported. As in other contexts where sexual violence is used as a weapon of war, it is used to instil fear, break resistance, and create deep individual, generational and societal trauma and harm.

There is no indication that the Russian military command is taking any action against the use of sexual violence by members of their troops. On the contrary, a Russian brigade was given a medal of ‘honour’ upon their return to the Russian federation, despite plausible evidence of war crimes having been committed in Bucha.

We listened with horror to reports of rape and other forms of sexual violence, and the excruciating fear generated. Families are hiding their children in wardrobes and under bags of potatoes during incursions. We learned of soldiers going door-to-door looking for women and girls, forcing them into hiding into the forest in sub-zero temperatures.

Amid these testimonies, there is a remarkable determination to document, investigate and prosecute crimes committed during the conflict, including sexual violence and other war crimes. It is important to ensure that a survivor-centred approach is adopted in the documentation process to avoid over-documentation and the further traumatisation of victims. The Murad Code, a global code of conduct for collecting information from survivors of systematic and conflict-related sexual violence, provides important guidance in this respect.

Throughout discussions with different ministries and civil society representatives, we observed the remarkable determination and capacity to support survivors.  This is exactly what is needed to ensure high-quality holistic care including immediate medical and psychological support.

Fulfilling survivors’ rights to reparations is also an essential component in supporting survivors to rebuild their lives. The reflections on compensation for victims taking place in Ukraine are very promising in this regard. From other contexts, we have learned, for example, that providing a new place to live could be a concrete and first form of early reparation for survivors who have experienced brutal sexual violence, sometimes over long periods of time in their own homes. Such initiatives could form part of a comprehensive reparations policy.

Survivors in Ukraine face many challenges in obtaining the urgent care they need. The destruction of health facilities – which were selected as targets for shelling in Kyiv, Kharkov, Sumy, Chernihiv, Luhansk, Donetsk and Mariupol – and other social service structures, particularly in East Ukraine, as well as the fear of reprisals and stigma prevents survivors from coming forward. As for victims in occupied areas, civil society actors are unable to reach or identify, let alone to care for them.

Community-based approaches will be crucial to supporting survivors, and this includes sensitisation on conflict-related sexual violence and its impact. Ensuring that psychosocial support services are available within communities can also support in creating a safe environment, conducive to accessing care and reporting the crimes.

To tackle the stigma attached to sexual violence, public acknowledgement of the crime perpetrated and harm suffered needs to come as soon as possible as a form of reparation.  As Ukrainian survivors of sexual violence from the 2014 conflict highlight: “Survivors need to hear that the people are with us, that the State supports us. That the victims and their families are not to be blamed, that this is a huge tragedy and that we will receive support to help us become who we were before”.

The Mukwege Foundation and GSF are deeply committed to working with Ukrainian actors to ensure access to holistic care and to provide technical support on reparations moving forward and will sign a Memorandum of Understanding with the Ukrainian Government to this effect.

The Dr. Denis Mukwege Foundation is an international human rights organisation working together with survivors of wartime sexual violence from around the world. Established in 2016, with headquarters in the Hague and Geneva, the Dr. Denis Mukwege Foundation supports survivors’ demands for a world where sexual violence as a weapon of war is no longer tolerated, and bears consequences for individual perpetrators and states.

We work for a future where survivors receive the holistic care & compensation they need to rebuild their lives. We create opportunities for survivors to speak out and be heard, and where they can organise to create change, influence policies, and demand justice and accountability.

The Mukwege Foundation collaborates closely with Panzi Foundation DRC to roll out its comprehensive holistic model of care in other conflict-affected countries via capacity building and support to national and local actors in the provision of holistic assistance to survivors of sexual violence and in particular conflict related sexual violence.

Since 2018, we have supported the Eastern Ukrainian Centre for Civic Initiatives and accompanied the development of the Ukrainian branch of the Global Network of Survivors of Conflict Related Sexual Violence: SEMA Ukraine.

The Global Survivors Fund (“GSF”) was launched in October 2019 by Dr Denis Mukwege and Nadia Murad, Nobel Peace Prize laureates 2018. Its mission is to enhance access to reparations for survivors of conflict-related sexual violence around the globe, thus responding to a gap long identified by survivors.

In 2020, GSF launched a global reparations study focusing on the status of and opportunities for reparations for survivors of CRSV in over 20 countries, including Ukraine. The Ukraine study, which was conducted in partnership with EUCCI, Truth Hounds and Blue Birds, includes a review of legislative and policy frameworks relevant to CRSV and to reparations, and importantly, findings from consultations with CRSV survivors on the harm they suffered as a result of CRSV, their needs, and the forms of reparations they demand to help repair such harm. The study’s publication is expected in June 2022.