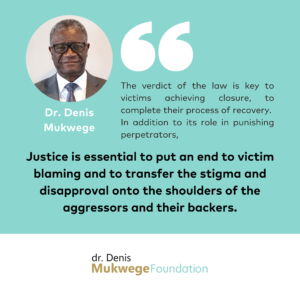 On the occasion of the 8th celebration of the International Day for the Elimination of Sexual Violence in Conflict, we wish to express our solidarity with all victims of sexual crimes, we salute the courage of the survivors who fight for their rights, and we launch a solemn appeal to all States to no longer tolerate the use of sexual violence in times of war and to put an end to these serious violations of human rights and international humanitarian law that are a disgrace to our humanity.

This date of June 19 commemorates the adoption in 2008 of Security Council Resolution 1820, which, by condemning the use of sexual violence as a weapon of war, constitutes a decisive turning point in the Women, Peace and Security Agenda and in the recognition of conflict-related sexual violence as a threat to collective security, an obstacle to peace-building, and a barrier to the achievement of human rights and the Millennium Development Goals.

Furthermore, rape and other gender-based crimes were rightly codified in the Rome Statute establishing the International Criminal Court as a war crime, a crime against humanity, and even as a constitutive act of genocide.

Today, thanks to this recognition and evolution of the law, no political or military leader can ignore or neglect the fact that it is contrary to international law to use rape and sexual violence as a method of war and a strategy of domination and terror.

Yet, we note with bitterness that political will is often lacking, financial resources are insufficient, and this normative framework struggles to be effective: rape and sexual violence are used in all contemporary conflicts around the world – as in the current situation in Ukraine – resources remain limited to provide quality services to victims, and the culture of impunity enjoyed by the perpetrators and instigators of these despicable acts remains more the norm than the exception.

We therefore once again urge the community of states and donors to mobilize human and financial resources to deal with the consequences of sexual violence committed in times of conflict and to redouble their efforts to prevent the recurrence of these crimes. This means supporting victims with quality, holistic assistance, as well as supporting survivors’ associations. It is also fundamental to fight patriarchy and ensure the promotion of gender equality and women’s active political participation, to carry out gender-sensitive security and justice sector reforms, and to combat the climate of impunity that still largely prevails.

Indeed, we continually advocate for strengthening accountability efforts against perpetrators and sponsors of sexual crimes, through domestic justice and, where there is no capacity and willingness, international criminal justice, as well as for increased state accountability.

The prohibition of rape and sexual violence entails obligations on the part of States, in particular an obligation to protect, which includes criminalizing sexual violence, effectively punishing the perpetrators, and providing adequate reparation to the victims. Only by strengthening accountability, both at the individual and state level, can we prevent the recurrence of crimes and draw a red line against the use of conflict-related sexual violence.

It is in this context that we welcome the historic decision of the Inter-American Court of Human Rights, which in 2021 declared the State responsible for violations of the rights of the Colombian journalist Jineth Bedoya, 20 years after she was the victim of kidnapping and sexual abuse.

Finally, we fully support the recommendations of the latest report of the Secretary General of the United Nations and the work of the office of his Special Representative on Sexual Violence in Conflict, which aim to improve the level of compliance of parties to conflict with the norms and resolutions established by the Security Council.

State compliance with the international normative framework put in place since the adoption of Resolution 1325 is so low that it is imperative to send a strong and clear political message by strengthening compliance mechanisms. Non-compliance with international norms by state and non-state actors must be denounced and sanctioned: lists of states and armed groups must be drawn up and published at regular intervals, and targeted sanctions must be applied to perpetrators and political and military leaders, particularly on the basis of conflict-related sexual crimes. Those who tolerate or order the transformation of the bodies of women and girls, as well as men and boys, into battlefields must be ostracized by the international community, have travel and visa bans imposed on them, and their assets and financial resources frozen without further delay.

Finally, in recent months we have seen an unprecedented outpouring of solidarity and mobilization to sanction the invasion of Ukraine and to respond to humanitarian needs. In addition, the calls for documentation of crimes and investigations give hope for a renewed interest in international justice. It is in this context that we call on the community of states to put an end to double standards and to a multi-speed and variable geometry humanism.

Suffering is universal and so are the needs in terms of quality care and justice. It is time to mobilize real political will whenever our humanity is attacked by barbarism and to act with the same firmness against conflict-related sexual violence wherever it occurs.