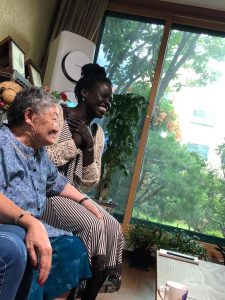 Today, on August 14th, we celebrate Kim Hak-soon halmoni, a Japanese military “comfort woman” who 28 years ago told the world about the atrocities committed against her.

Her courage provided a pathway for countless more women to speak out. This moment was a trigger for efforts by and on behalf of the survivors to demand justice, condemn the perpetrators and communicate to the world the consequences of conflict-related sexual violence. So together we celebrate all of those survivors who have tirelessly been fighting and refused to give up hope.

In the past weeks, survivors from over 10 countries – from Colombia to Burundi to Bosnia to Iraq –have demonstrated their support to the “comfort women” of the Japanese military sexual slavery system that was executed during the Second World War. Words of solidarity, hope, anger and perseverance have been expressed by members of SEMA, the Global Network of Victims and Survivors to End Wartime Sexual Violence, who together with the “comfort women,” are fighting back. 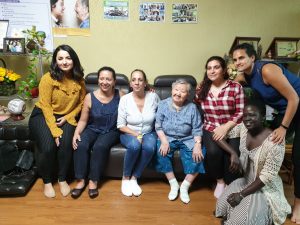 The dedication of activists in Seoul, South Korea who have been tirelessly challenging inadequate responses to accountability has had an immeasurable impact: They gave a greater voice to survivors who suffered 50 years of silence, encouraged survivors worldwide to speak out and take action, demonstrated how activists and civil society can cooperate and work towards justice, and broke ground for similar movements around the world.

A sad truth is that only a few survivors are still alive. Those who fought throughout the past decades did not obtain the justice they deserved. Japan continues to deny its role. Perpetrators went unpunished. Apologies have been inadequate. Sufficient reparations are lacking.

Despite this, the story of the “comfort women’s” activism is astonishingly inspirational. Memorials to these women have been set up all around the world.

As of today, 1400 Wednesdays in Seoul have been marked by protests since the first Wednesday Demonstration in 1992.

But potentially more importantly, this movement has proven to the world that sexual violence in conflict can be condemned by communities and nations at large. Sexual violence does not have to be something that attaches stigma, but rather such stigma can be challenged by both survivors and civil society. And this refusal to silence victims is illustrated by more than 30.000 protestors annually who support the “comfort women” in their fight for justice.

Members of SEMA are planting the seeds for similar movements. The Korean example can provide crucial knowledge on how to successfully pave the way for such movements elsewhere. NGOs and survivors working together proved effective. In 1990, 37 different women’s rights organizations formed a coalition to resolve the issue, the Korean Council for the Women Drafted for Military Sexual Slavery by Japan (which is now The Korean Council for Justice and Remembrance for the Issues of Military Sexual Slavery by Japan). Citizens support initiatives which help to provide a safe platform for survivors to speak out. Businesses also assist initiatives for survivors, such as Marymond, a Korean company that fights for human rights and brings attention to the “comfort women” issue. Their approach provides for an innovative way to involve youth, which is particularly crucial as educating and involving youth is vital in movement building, and leads to greater societal understanding of the issue at hand. Finally, involving survivors in all initiatives is fundamental – from building a museum, to designing monuments, to making demands for reparations.

Since the network was launched, SEMA has been supporting “comfort women” and their efforts to obtain justice. At the same time, they have learned valuable lessons, and will continue to do so in the future. The “comfort women” fight is a true example of ‘nothing about us without us,’ the guiding principle of the Global Network of Victims and Survivors to End Wartime Sexual Violence.