The Movie SEMA- made by survivors 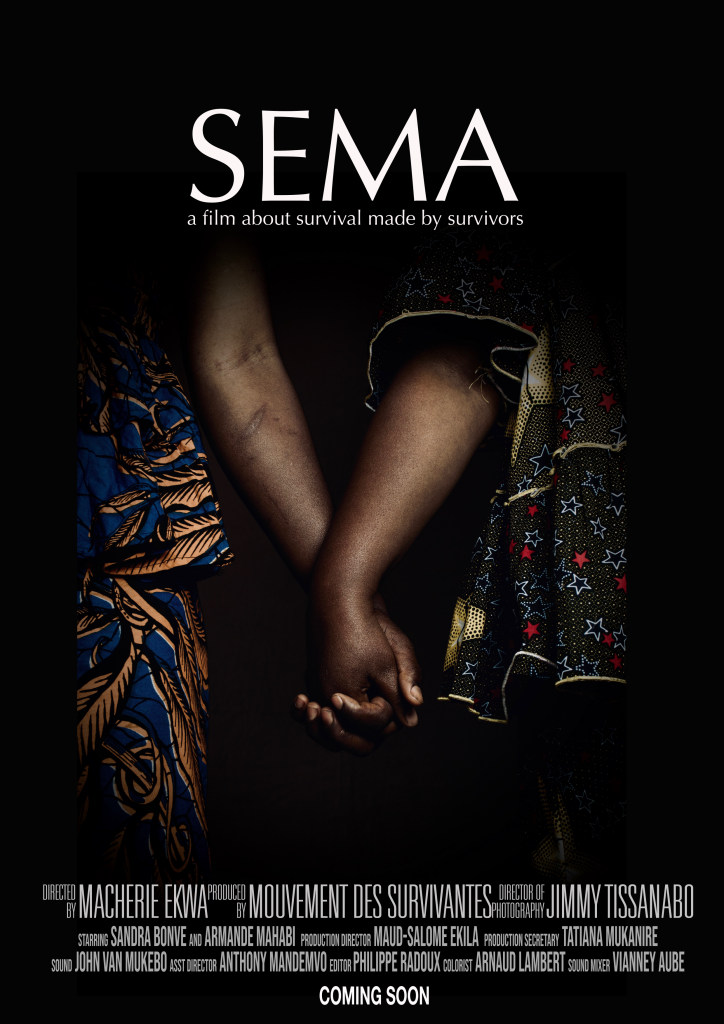 The film SEMA is coming soon!

Look for it at a festival near you.

Connect with us here to stay up to date on where it’s showing.

The eastern part of the Democratic Republic of Congo has been devastated by more than two decades of war. Multinational companies finance violent rebel groups in order to keep the area in chaos and more easily plunder the precious minerals under the Congolese earth. These conflicts are characterized by an epidemic of the use sexual violence of a weapon of war.  Rape in wartime is used to terrorize and destabilize whole communities. The perpetrators of these rapes attack victims with extreme violence, which in many cases results in death, destruction of the genital area and other organs of the body, sexually transmitted diseases, unwanted pregnancies, depression and severe anxiety.

Survivors face crippling social stigma that prevents them from seeking justice, excludes them from their community and leaves them left on their own to support their children. Thanks to the support of Dr. Denis Mukwege, Panzi Hospital, and the courage of survivors, The National Movement of Survivors of Sexual Violence in the DRC was formed. The Movement is self-organised and today has nearly 3,000 members who speak out against this violence. Based on the premise that “together, their voices are stronger than silence,” they organise advocacy and awareness-raising activities to fight stigma and document what has happened to them- and ultimately, end the epidemic of sexual violence in conflict.

The Movement decided to create a film tell the story of what a survivor of sexual violence faces. The survivors of The Movement came together to write the screenplay based on their own real experiences. The majority of the acting roles are played by the survivors themselves. In order to create a truly powerful film, they bravely reenacted their own traumas. The survivors took on these parts conciously, realising the benefit of artistic expression as part of the healing process.  The film will be used as a tool for advocacy and communication: for other victims and Congolese society, as well as raising awareness around the world to the atrocities that survivors of conflict based sexual violence face. The film demystifies common myths in DRC about sexual violence. It will be used in outreach sessions organised by survivors in their communities, churches or youth groups. It will be disseminated in bordering African countries facing cases of sexual violence, as well as at festivals and conferences abroad to raise awareness of the issues of sexual violence in conflict and amplify the voice of survivors in the world.

The film SEMA (which means speak out in Swahili) follows the lives of two women from different backgrounds whose lives are changed forever by rape, and who must find the strength to survive and make a difference for themselves and their children. Kimia is a devoted University student who went to fetch water one evening so that the next morning would be free to prepare for an exam. At the lake, men that looked like police came out of the bushes and attacked them. One man’s scar would forever stay in her memory… Matumaini and other women in her village do most of the work in the household; they do chores, work the fields and take care of the children. Despite the difficult labor, the women are friends and support each other in the village. One evening as they were returning home from the fields, armed militia ambushed them with machetes. Not everyone survives the night… Six years later, Kimia and Matumaini must find a way to overcome their traumatic past and find hope for the future.

The Congolese Macherie EKWA is a young prodigy of international cinema. She is celebrated for her film Maki’la which premiered at the Berlinale. Because of its acclaim, she has been invited to screen her next movies at the Cannes International Film Festival. After hearing of her success, The National Movement of Survivors reached out to her to make the film SEMA.

Deeply concerned with social issues, Machérie Ekwa accepted the challenge of shaping and realising the story written by the women of the Movement. Despite the small budget and condensed schedule, she quickly set up a dynamic crew of young Congolese from Kinshasa and led them on this emotional experience.

The conflicts in the East of DRC and the critical situation in her country particularly concern her. Born in the city of Kisangani in DRC, her childhood was troubled by the wars since the fall of the Zaïre in 1997. Forever changed by the conflict that ravaged her country for more than two decades, the consequences of war on Congolese women motivated her to help the Movement to make the film SEMA.

She is currently working on her upcoming film “Zaïria.”

Sandra BONVE spent her youth in Bukavu. When Macherie Ekwa’s team began casting for the film SEMA, Sandra Bonve was the first actress to try her luck. For Ekwa, she was perfect for the role. Her powerful acting inspired huge emotions from the whole team after the first seconds.

At age 33, Sandra BONVE is a single mother who juggles several jobs. She has already played numerous roles in Congolese series and movies. The talented Congolese would like to devote herself 100% to working as an actress, which is unfortunately not yet feasible in DR Congo. Her outstanding performance in the SEMA film makes her one of the most promising Congolese actresses of her generation.

A supporter of the National Movement of the Survivors of DRC since 2017, Armande MAHABI is a Congolese student with a degree in financial management. While working with the women of the movement to write the script for SEMA, she did not think about playing a role in the movie.  She was however, eager to help on set to support the organization.

When rehearsals began for the actors in Bukavu, the director Machérie EKWA noticed her and asked her to audition for the second main role. Despite her very first experience in acting, she was particularly talented and brave to put herself in the skin of “Kimia”, the young student who survived atrocities in the city of Bukavu. Armande Mahabi is an ally the Movement of Survivors for a Congo and continues to pursue her studies at the University in Bukavu.

Many other survivors and volunteers played key roles on the cast and crew. Find out more on the credits page.

Letter from the Production Secretary

We need to help our fellow Congolese understand what we are living every day and how rape and stigmatisation can destroy the victims of sexual violence. Our goal with the film is to create a powerful advocacy tool so that even in our most small remote villages, communities can understand why we need to break the silence about the atrocities we experience on a daily basis. And how the community’s view of our children, often the product of rape, can cause further damage to Congolese society by creating a lasting heritage of stigma.

By partnering with director Macherie Ekwa, we thought as a 25-year-old Congolese woman, she was the ideal person, not only to do high-quality work, but above all to try to understand and turn our emotions into images.

The day we discovered the final product, we did not believe our eyes. It was impossible for us all to hold back our tears throughout the film’s screening and even after.

We are proud of this beautiful film created both female and male survivors of the Movement, the exceptional technical team assembled by Macherie Ekwa, the non-survivor actresses and actors and the work of our colleagues of the Panzi Foundation, the Dr. Denis Foundation Mukwege and Panzi Hospital. Our struggles and efforts are now timeless. From now on, this film can be shown to the Congolese people and to the world as a piece of history which, we hope, will be part of the past as soon as possible.

Armed conflict which brings genocide and the use of rape as a weapon of war must stop. It is our dearest wish and today, it is our fiercest fight.

So that our children live in a better Congo, a Congo without rape, a Congo in peace,

So that these rapists can no longer act with impunity without justice doing its job,

So that all the victims of these atrocities can obtain reparations,

We unite as the National Movement of Survivors of the DRC and we encourage all our sisters and brothers to stand with us. ”

National Coordinator of the Survivors Movement and Production Secretary of the SEMA film.

The Movement of Survivors DRC